HOW VR IS MORE NECESSARY THAN EVER FOR ARCHITECTS

2021 WITH MARRAUM: OUR YEAR IN REVIEW
VIRTUAL REALITY VS AUGMENTED REALITY: WHAT'S THE DIFFERENCE
THE POSSIBILITIES THAT VR CAN BRING TO YOUR HOME RENOVATION
VR WALKTHROUGHS THAT WILL INSPIRE YOUR NEXT BUILD
HOW 3D ARCHITECTURE CAN HELP SELL YOUR DEVELOPMENT
A BEGINNER'S GUIDE TO CAD ARCHITECTURE

Modelling Architecture explores how Virtual Reality (VR) is being used by architects and construction specialists, as well as the potential it holds for the industry as a whole right now and in the future.

The notion of entering a virtual world has always been a familiar concept for the world of science fiction, yet as technology evolves we’re beginning to become more comfortable with utilising it in our everyday lives. Virtual Reality, or VR, may seem like an abstract tool with few applications, yet with new companies emerging to harness its potential, we’re seeing just how useful a tool it can be.

VR technology has evolved drastically over the past decade, yet its journey from concept to modern-day creations is undeniably strange. Way back in 1957, the filmmaker Morton Heilig created a gigantic booth that he titled the ‘Sensorama’. Soon after in the 1960s a large headset was showcased to confused audiences, labelled the ‘Sword of Damocles’, and a decade later the ‘Super Cockpit’ was also unveiled to little fanfare.

It wasn’t until the 90s that VR technology began developing into the form we know it as today, albeit originally primarily used for entertainment in the world of video gaming. From the vaguely defined flop that was the ‘Sega VR’ to the infamous failure that was ‘Virtual Boy’, VR didn’t capture an audience for years due to the lack of available technology at the time. It wasn’t until 2010, with the Oculus Rift, that applicable, adaptable VR technology revealed itself not just to the world of video games, but for a diverse array of different industries.

One such industry was construction and architecture.

The past few years have seen many companies and businesses see the advantages of utilising VR and AR technology, with no industry seeing more benefits than those in the construction industry. Both architects and construction specialists understand how useful a tool VR, in particular, can be with projects, especially for those seeking to visualise buildings or plans via 3D modelling, yet the COVID-19 pandemic has revealed VR can be even more useful. 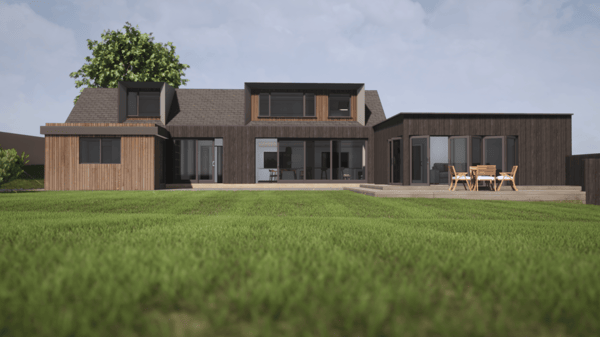 How VR is affecting construction & architecture

The potential of VR has been increasing more and more throughout the year, with the ability to fabricate objects and environments in a virtual space being something that can save a lot of time and money for architects and construction specialists. The examples of such are limitless, ranging from being able to design the perfect home, down to the most minute detail and with the ability to alter plans on the fly, to producing fully explorable skyscrappers without even laying a brick.

Much like drawing up plans, VR doesn’t necessarily limit itself to the end result, as it’s entirely possible (and in fact, a common practice for those working with 3D models) to create an architectural structure or a modelled plan for a construction project and simply save each step of it separately. This offers a unique advantage to VR, being able to essentially showcase the development of a project piece by piece.

Instead of lengthy processes of physically building something and repeatedly checking the progress, VR allows architects to create a step-by-step process of the building process. This grants anyone involved in the process a wealth of freedoms, such as the ability to provide detailed feedback throughout the project, experiment with alterations to the design or simply to experience the project in a deeply immersive visual format.

Of course, with such an advancement in technology comes the need for advanced training and new skills to master, yet just as technology becomes more common and accessible, so too will those who can properly utilise it.

Along with being able to tailor create virtual environments and present them to others in safety, VR grants architects one all-important advantage to conventional creation methods; the ability to adapt. There are many different types of VR software that specialise in architecture and construction purposes and exploring these tools can present opportunities to experiment with a project’s design and improve them at each step of the process.

Some software allows users to toggle settings such as natural lighting, construction materials and even electrical components, granting the opportunity to present a concept or an idea like never before. Many VR designers, from every industry that has tapped its potential, will sing the technology’s praises, citing such advantages as being able to truly grasp the scale of a project, how it feels to interact with designs ‘in person’ before ever building them, or even simply being able to visualise a sketch.

VR technology is still evolving to this day, as right now the main focus of VR is the use of 3D goggles and headsets, yet as further advancements enter the market, the potential to utilise VR in architecture and construction will be even greater. One exciting example is the use of haptics with VR, which could one day lead to architects not only being able to show their concepts to others but to allow others to feel the concepts.

Bring VR architecture to your next project

2021 WITH MARRAUM: OUR YEAR IN REVIEW

THE POSSIBILITIES THAT VR CAN BRING TO YOUR HOME RENOVATION

VR WALKTHROUGHS THAT WILL INSPIRE YOUR NEXT BUILD

HOW 3D ARCHITECTURE CAN HELP SELL YOUR DEVELOPMENT

A BEGINNER'S GUIDE TO CAD ARCHITECTURE